Busy times, 9: Beyond the limit in St Petersburg

Anatoly Vershik is a universal mathematician, with influential work in asymptotic combinatorics, groups and group actions, probability, mathematical physics, and many other areas.

This week, I was in St Petersburg for a conference with the wonderful title “Representations, Dynamics, Combinatorics: In the Limit and Beyond”, celebrating his eightieth birthday. The meeting was at the Euler International Mathematical Institute, commemorating a universal mathematician who spent much of his career in St Petersburg.

In their talks, both Benjamin Weiss and Hillel Furstenberg quoted Psalm 90, which in the King James version reads

The days of our years are threescore years and ten; and if by reason of strength they be fourscore years, yet is their strength labour and sorrow; for it is soon cut off, and we fly away.

Both of them used something like “heroism” in place of “strength” here. It is heroic of Anatoly to be still as active in mathematical bridge-building as he is. He is a hero in another sense too. As someone who has always chosen his own path, he had a lot of trouble from bureaucrats during his life, even condemned to work in an Operations Research department for a time. But these stories are better told by someone else.

He is more than twelve years older than I am, but perhaps I am scattier. I was in the agency that processes Russian visa applications for an hour and three-quarters, at the end of which I know what the stupid pupils in the class feel like. I took the form to the desk three times; the first two times I was told no, this wasn’t right, I should go away and do it again. They had computers in the place which applicants could use to re-do their forms, but although the form asked for the name, address, and telephone of every educational institute you had been to, access to all educational institutes was blocked, so I had to be a bit creative. Eventually the form was done and submitted, and I was told to come back the following afternoon. I spent the intervening thirty hours worrying about all the reasons they might have for turning down my application, but in the end my passport was there with a visa in it.

There was far too much interesting stuff at the conference for me to mention all but a small selection.

You can find slides of my talk in the usual place. 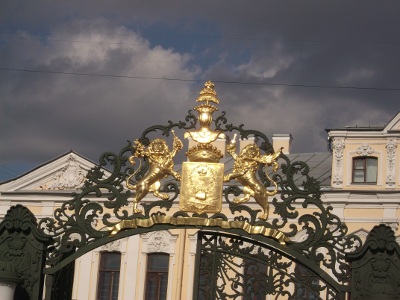 On Monday there was a party, at which various people gave eulogies about the birthday boy, and his daughter cut an amazing birthday cake. On Tuesday, he very generously took the foreign guests to a pie shop, a café where the speciality was pies (meat, cabbage, berry, and various other things), where we spent a congenial couple of hours. On Wednesday a leisurely boat trip in bright sunshine took us to the extraordinary conference banquet: walking home with Greg Cherlin through the white night was quite an experience. On Thursday there was a chamber music concert, featuring music by St Petersburg composers of the early eighteenth century, including Madonis (I didn’t catch the names of the others). Friday was the excursion, to Menshikov’s Grand Palace at Oranienbaum and then Peter the Great’s naval base at Kronstadt.

On Saturday I was able to give my talk and attend all but the last talk of the conference, and still be back home in London well before the Underground closed for the night.

I count all the things that need to be counted.
View all posts by Peter Cameron →
This entry was posted in events, exposition, mathematics and tagged Anatoly Vershik, asymptotic combinatorics, Ramsey theory, St Petersburg, string theory. Bookmark the permalink.

6 Responses to Busy times, 9: Beyond the limit in St Petersburg