A Latin square of ordern is an n×n array of symbols from an alphabet of size n with the property that each symbol in the alphabet occurs once in each row or column. Two Latin squares L and M are orthogonal if, given symbols x and y from the alphabets of L and M respectively, there is a unique position (i,j) in the array such that Lij = x and Mij = y. 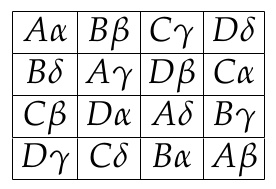 A Latin square orthogonal to a given square L is called an orthogonal mate of L.

A source of Latin squares familiar to algebraists consists of Cayley tables of groups. The Cayley table of G is the array whose rows and columns are indexed by the elements of G, with (g,h) entry gh. (Sometimes it is more convenient to take the entry to be (gh)−1; the square obtained is equivalent to the original under a permutation of the symbols of the alphabet.)

A different language is sometimes used here. A complete mapping of G is a bijective function φ from G to itself such that the function ψ given by ψ(g) = gφ(g) is also bijective. If φ is a complete mapping on G, then the Cayley table of G has an orthogonal mate, whose (g,h) entry is gψ(h). (Given x,y in G, we need to find g,h in G such that gh = x and gψ(h) = y; this requires φ(h) = x−1y, from which h and hence g is uniquely determined.) Conversely, the existence of an orthogonal mate implies that of a complete mapping.

In 2009, there was significant progress on the conjecture, in two papers in the Journal of Algebra. Stewart Wilcox, in J. Algebra 321 (2009), 1407–1428, showed that the truth of the conjecture for all groups would follow from its proof for finite simple groups. (Burnside’s Transfer Theorem shows thath a finite simple group, other than the cyclic group of order 2, cannot have cyclic Sylow 2-subgroups, so what is required is to show that all such groups have complete mappings. This is elementary for cyclic groups of odd prime order, so we have to deal with the non-abelian simple groups.) He showed that it holds for all simple groups of Lie type, with one exception, the Tits group (the derived group of 2F4(2)) have complete mappings. Anthony Evans, in J. Algebra 321 (2009), 105–116, handled the Tits group, and also all of the sporadic groups except the Janko group J4. The final sporadic simple group was dealt with by John Bray, but his result remained unpublished.

In the meantime, work on synchronization found a use for the truth of the Hall–Paige conjecture. I have described synchronization before, indeed more than once; it is a small obsession of mine now. So here is a very brief summary of all that I need.

So, to test whether G is synchronizing or not, we may assume that G is primitive (this means that it preserves no non-trivial equivalence relation). Primitive groups are described by the O’Nan–Scott Theorem, of which I require here just a simple version: Any primitive permutation group G satisfies one of the following:

The first type are not synchronizing. For such a group preserves a Hamming graph, whose vertices are all the m-tuples over an alphabet of size q, two tuples being adjacent if they agree in all but one coordinate. Such a graph contains cliques of size q (fix all but one coordinate and let the last coordinate take all possible values). It also has a colouring with q colours: take the alphabet to be an abelian group Q, and colour an m-tuple with the product of its entries in Q.

So synchronizing groups must be affine, diagonal or almost simple.

I will not here describe in detail what diagonal groups look like; here are some properties of the “three-factor” diagonal groups. Take a non-abelian finite simple group T. The group in question has minimal normal subgroup consisting of the direct product of three copies of T. To this we can adjoin automorphisms of T (acting simultaneously on the three copies) together with permutations of the three coordinates. This group acts on the set of cells of the Cayley table of G (which we take in the modified form with (g,h) entry (gh)−1, in other words, the unique k such that ghk = 1). The equation ghk = 1 is preserved by cyclic permutation of the three group elements. Now T3 acts to preserve these triples. An element t of the first factor acts by right multiplication on g and by left multiplication (by t−1) on h; the other two factors are similar but with the group elements permuted.

Now the clique number of the Latin square graph from a Latin square L of order n is n if n > 2 (a clique consisting of a row, or a column, or a symbol). The chromatic number thus cannot be less than n, and it is not hard to see that it is equal to n if and only if L has an orthogonal mate. (Use the symbols in the orthogonal mate as colours.) Thus, the Hall–Paige conjecture implies that the three-factor diagonal group built from a non-abelian finite simple group is non-synchronizing.

Encouraged by this, I was able to find a proof that diagonal groups with more than two factors are non-synchronizing. The proof for even numbers of factors is elementary, but for odd numbers of factors it uses the Hall–Paige conjecture in a similar manner to the above. The same conclusion was obtained by Pablo Spiga.

With this in hand, I managed to persuade John Bray that the time was right for him to dig out the files of his calculations and publish them. In fact, he did a lot more; he re-did the calculations, and put in several checks on their correctness (enabling different “minimal proofs” to be given). Moreover, he contributed these files to a joint paper proving the result above about synchronization, together with a weaker result covering affine groups and diagonal groups with two factors.

Now the permutation representations of J4 have rather large degree. The one he uses, by conjugation on the involutions of type 2A, has degree more than a billion; so only very limited direct computation in this permutation group is possible. The most convenient representation of the group for computation is by matrices of order 112 over the field with two elements. Now since the objects we are permuting are involutions, we can look at their fixed point spaces in this 112-dimensional vector space. John is able to find a “signature” for pairs of involutions, involving four dimensions related to the pair, which distinguish all the 20 orbital graphs.

Another check is provided since John finds that all the double cosets apart from H itself have double coset representatives of order 3. These imply the existence of triangles (which are different from the previous in the case when the graphs are directed), verifying the condition required with Φ the identity map and Ψ(D) = D−1.

The paper is on the arXiv, here. As well as the above, it contains weaker results for affine and two-factor diagonal groups, which simplify the computational testing of these groups. For affine and two-factor diagonal groups to be non-synchronizing, it suffices to find a G-invariant graph for which the product of the clique number and independence number is equal to the number of vertices. This result were found independently by Qi Cai and Hua Zhang; so the paper ended up with five authors.

2 Responses to The Hall–Paige conjecture