Another understanding of the logo of TGU is some sailing boats and books, meaning sailing in the sea (river) of books.

As evidence for this, here is a picture of Three Gorges, presumably as it was before the dam was built:

You can see that the sails of the boats in the foreground do resemble the CTGU logo. And here is the real thing:

The last picture was taken on the conference excursion, which took us to several beauty spots on the Xiling Gorge, below the dam. I should probably say that “beauty spots” might be more accurately translated as “tourist spots”: the number of tourists is so great that, rather than allow them to ramble as they choose through the rugged and dangerous terrain, they concentrate them in a few places where suitable entertainment can be provided. The boats are at Longjin, where they feature in a story which was never quite clear to me, something about a girl being married off against her will, I think.

On a walk up the small side stream to a waterfall, I passed a sign which said, “”Watch your head observe and pass”. This sounds to me like an advanced meditation technique, but it was really a warning about an overhanging rock.

We also visited a reconstructed village of the Ba people, prehistoric inhabitants of the region. This time the story was even less clear to me; the musical accompaniment was pleasant enough, but the music played before the performance was much too loud and mechanical to be listenable. The audience sat on benches under three large and ancient trees; pleasant on a very hot day until I observed that every leaf on the trees was made of plastic.

The scenery was spectacular, but unfortunately the muddy water of the river and the polluted air made it impossible to take any pictures worthy of a tourist brochure. This will have to suffice: 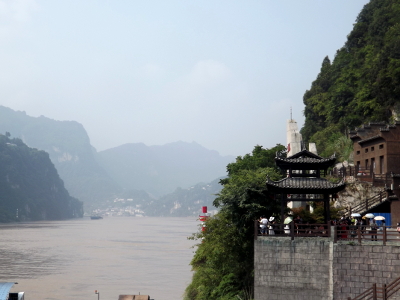 The conference organisers, who delighted in satisfying our every desire, put on another ad hoc excursion at the end of the meeting, a half-day trip involving a visit to the famous dam followed by a cruise down the river. Here is a picture of the dam, the largest in the world, and some of the spectacular scenery we saw from the boat.

I count all the things that need to be counted.
View all posts by Peter Cameron →
This entry was posted in geography, history and tagged Three Gorges, Three Gorges Dam. Bookmark the permalink.