The people from the planet Ade have intercepted radio transmissions from Earth, and have discovered that we know about the Petersen graph 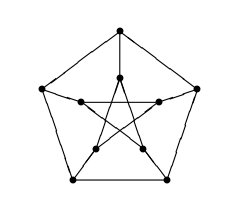 and the root system E6.

One day, a flying saucer from Ade arrives on Earth and delivers an ultimatum:

Either show me a construction of E6 from the Petersen graph, or I will arrange that Boris Johnson will be the next Prime Minister of the United Kingdom.

Too late, I present the solution the alien is looking for.

But there is a problem: these vectors are too short; their lengths are only √5/2.

The solution is to add a sixth dimension and extend the vectors in this dimension. Take a new basis vector e6, and add ce6 to each of the five. To get length √2, we have to choose c = √3/2. This doesn’t affect inner products with the first five, since e6 is orthogonal to them.

But wait a minute, where is the root system? We have produced vectors of the right lengths, and having the right inner products. But a root system must be closed under reflection in the hyperplane perpendicular to each of its vectors. How to we achieve that?

The answer is simple: we simply close up. Take the reflection of the vectors we have in the hyperplanes perpendicular to each of them; this gives some new vectors. Repeat the procedure with the enlarged set until no new vectors are found. Then we have a root system. A little thought, or a little theory, shows that it is an indecomposable root system in R6 with all roots of the same length, and is not A6 or D6; so it must be E6.

I am writing this at the LMS-sponsored Undergraduate Summer School at the University of Leeds. This consists of several mathematicians giving short courses (three lectures and two tutorial sessions) on different branches of mathematics, and a few other people giving one-off talks (or in my case, two one-off talks). The students are very keen and engaged, and tackle the problems (including challenge questions) with great enthusiasm.

One of this week’s lecturers is Sira Gratz from the University of Glasgow, talking about what readers of this will recognise as one of my favourite topics: what I call the ADE affair. Sira entitled her series “Attractive Diagrams Everywhere”, which she has certainly demonstrated; she did admit in her first lecture that someone interpreted the acronym as “Aliens Do Exist”.

Her selection of topics was (to my great pleasure) almost disjoint from what I would have chosen myself: the three lectures described, in detail, root systems, quivers of finite representation type (Gabriel’s theorem shows that these must be orientations of ADE diagrams), and cluster algebras (Fomin and Zelevinsky showed that the finite-dimensional ones are also described by orientations of ADE diagrams). She explained in each case the wider significance of the ideas.

Anyway, tomorrow I am talking about the (countable) random graph. I had planned to start off with the Petersen graph, to point the contrast between finite and infinite. The Petersen graph is highly symmetric, but very atypical among finite graphs (random finite graphs have no non-trivial symmetry with high probability), whereas the countable random graph (there is only one) is highly symmetric.

But I thought it would be nice to make some connection with Sira’s lectures. Thinking about the Petersen graph and root systems led me to the construction I have just described.

I count all the things that need to be counted.
View all posts by Peter Cameron →
This entry was posted in doing mathematics, events and tagged Petersen graph, random graph, root systems, Sira Gratz, University of Leeds. Bookmark the permalink.

1 Response to Aliens Do Exist