A trip to Hull 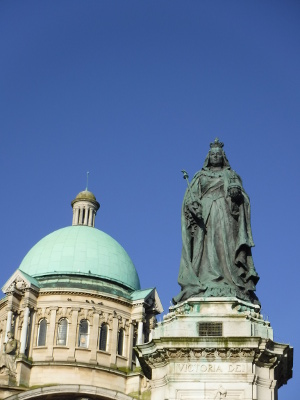 At the end of last week I went to Hull. This is a place I hadn’t been to before, although it was City of Culture last year. I stayed overnight in the Hull Royal Hotel, where Queen Victoria (pictured above) had been an earlier guest. The hotel is so close to the station that, when you look out of the window at breakfast, you find yourself looking down Platforms 4 and 5, watching the trains come and go.

I was there to give the 2018 John Venn lecture. John Venn, inventor of the eponymous diagrams, was born in Hull in 1834, though he spent most of his career in Cambridge, where he was a fellow and sometime President of Gonville and Caius college, an institution with which I have a somewhat tenuous association.

I talked about the commutative law. As well as some of the stuff I talked about here (one of my most controversial posts ever, I am not sure why), it gave me a chance to wander round some of the back roads of logic, quantum mechanics, cryptography, etc., and to show some pictures from Alice’s Adventures in Wonderland and Through the Looking Glass. The slides are in the usual place, if you are interested.

After a very nice dinner, I slept well, and had time before I caught my train to have a short walk around the town.

The countryside through which the train runs on the way to Hull is extremely flat, like the Fens in East Anglia but if anything even more so. One of the stations is called Gilberdyke (you get the idea). After a while, hills appeared to the north (the Yorkshire Wolds, where I once ran one of the toughest half marathons of my life, and won a small prize as Fourth Veteran), then the Humber to the south, the wide estuary into which the rivers Ouse and Trent flow, now spanned by the Humber Bridge. I had just time enough in the morning to get down to the old docks, where (among other things) more than two million people from Europe arrived on their way to the New World (they mostly crossed to Liverpool and took ship there). It has a somewhat bleak and desolate feeling now.

To finish, this is an excuse to recite one of my favourite poems to you, “Days”, by another famous inhabitant of Hull, Philip Larkin:

What are days for?
Days are where we live.
They come, they wake us
Time and time over.

They are to be happy in:
Where can we live but days?

Ah, solving that question
Brings the priest and the doctor
In their long coats
Running over the fields.

I count all the things that need to be counted.
View all posts by Peter Cameron →
This entry was posted in geography, history and tagged City of Culture, Hull, humber, John Venn, migrants, Philip Larkin, Queen Victoria, Venn diagrams. Bookmark the permalink.