Last week, I was lecturing at a summer school in Franz Dohrmann Haus, a very pleasant conference centre in the small town of Marienheide, not far from Köln. Apart from a walk on Wednesday afternoon, I didn’t get much exercise, and the food was excellent and plentiful (including fresh figs for breakfast), so I am sure I have come back a kilogram or two heavier. (Table tennis was available, but the students preferred to play bizarre card games, occasionally involving physical assaults of various kinds.)

There were various jobs I was hoping to do, but the wi-fi in the place was totally inadequate, so that it was impossible to upload or send anything bigger than a small textfile. This had the effect of keeping us focussed on the mathematics.

The topic of the summer school was permutation groups. The main speakers, apart from me, were Cheryl Praeger, Csaba Schneider, and Pablo Spiga. As you might expect, we were very much focussed on finite permutation groups, and in particular, on groups which were at least quasiprimitive but not 2-transitive; and the O’Nan–Scott Theorem played a big part in the proceedings.

Cheryl then described her extension of the O’Nan–Scott Theorem to quasiprimitive groups. Of the eight cases in Kovács’ version of the theorem, in several of them the group is necessarily primitive, and in most of the others the conclusions are almost identical with those in the usual version. The exception is the product action case, where the group may have an invariant partition so that it acts on the parts as a primitive group of product action type, but the intersction of the socle with the point stabiliser is a subdirect product (rather than a direct product) of factors coming from the base group.

Purely by chance, she was explaining the pioneering work of Tutte on arc-transitivity; I happened to be wearing a t-shirt with Adrian Bondy’s photo of Tutte on the back, so I stood up and exhibited it (to a round of applause).

Following this, she described progress (or lack of it) on dealing with these cases for s arc transitive graphs.

Previously, she had described distance-transitive graphs, and given Derek Smith’s description of the ways in which the automorphism group of such a graph can be imprimitive, and how to reduce to the primitive case.

Csaba and Pablo both talked about aspects of the O’Nan–Scott Theorem. Pablo had to leave after three days, so only gave four lectures. He took us through the theorem, and described some consequences. One of these was an impressive new theorem which asserts that, with known exceptions (basically the large groups, subgroups of the wreath product of the symmetric group of degree n on k-sets with some transitive group of degree l containing the socle (An)l), every element of such a group is a “regular” permutation, one which has a cycle of length equal to its order.

Pablo’s other application was to a conjecture of Richard Weiss made nearly 40 years ago. It asserts that if a finite graph is connected and vertex-transitive, and the vertex stabiliser acts primitively on its neighbours, then the order of the vertex stabiliser is bounded by a function of the valency. (This is related to the Sims conjecture.) He proved it for twisted wreath products as an illustration of the techniques.

Csaba’s focus was on what I call “non-basic groups”, those which preserve a Cartesian decomposition of the domain. Such a decomposition is a collection of partitions with the property that, given an arbitrary choice of one part from each partition, there is a unique point in the intersection of those parts. (The points can be identified with all words of length l over an alphabet A, and the ith partition divides the words according to their entries in the ith coordinate. He and Cheryl are writing a book about this; a prelimiary version is available on his website.

(In fact, I have GAP code for checking this, which I wrote in connection to the road closure problem, which (to my great surprise) seems to be competitive with other methods, but which is still capable of significant improvement.)

In his final lecture, he spoke about twisted wreath products. Primitive groups with a unique minimal normal subgroup which is non-abelian and acts regularly are necessarily of this form; this case was omitted from the first versions of the O’Nan–Scott Theorem, but Aschbacher and Scott, and Kovács, pointed out that examples do exist. The twisted wreath product construction was already known; it was probably discovered by B. H. Neumann, and is dealt with in Suzuki’s book. Csaba explained the necessary and sufficient conditions for a twisted wreath product to be a primitive permutation group. (The smallest example is a semi-direct product of (A5)6 by A6, and is a permutation group of degree 606; so it is unlikely to arise in a computational problem for a few years yet.

My lectures were about permutation group problems arising from transformation semigroups; in particular, what are the conditions on a permutation group G if the semigroup generated by G and f has some nice property (such as synchronizing, regular, or idempotent-generated apart from the group G) for all non-permutations f, or all in some restricted class (such as all of rank k, or all with image a prescribed set of size k). The resulting conditions are typically equivalent to or closely related to primitivity if k = 2, or to higher degrees of homogeneity for larger values. So I was interested in groups slightly higher in the hierarchy than my fellow lecturers, for the most part.

In addition, there was a lecture by Tomasz Popiel, on results he found with his Perth colleagues on generalized polygons with point-primitive groups. They use the O’Nan–Scott methodology, together with some nice new results on fixed point ratios of primitive groups of various types. Tomasz asked for help in obtaining similar results in the twisted wreath product case (which has not yet succumbed to their analysis).

The lecturers also posed exercises for the students to work (and gave solutions to them), and there was also a problem session, which will be written up in due course. 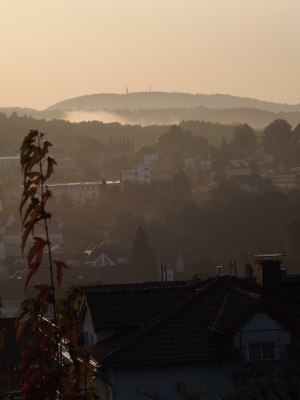 The weather at the start of the week was not so good. When we started out on the walk (round two local lakes, about 17km) on Wednesday afternoon, we could hardly see where we were going at the start; but by the time we returned, it had become a beautiful afternoon. The next day was so nice that we moved outside for the problem session. The lecture room had two large blackboards, each a triptych which could be folded out to give lots of board space, or closed to give some additional space for results that would be needed later; they were on rollers, and so it was possible to move one, and enough chairs, outside.

I count all the things that need to be counted.
View all posts by Peter Cameron →
This entry was posted in events and tagged Cheryl Praeger, Csaba Schneider, O'Nan-Scott theorem, Pablo Spiga, permutation groups. Bookmark the permalink.