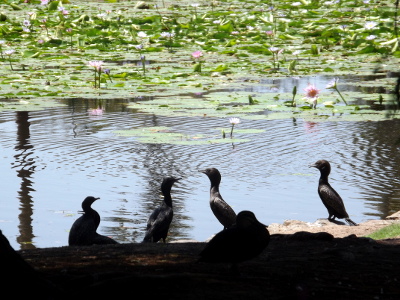 The first leg of our trip down under involved flying to Brisbane and staying for a couple of days to get over the worst of the jet lag.

Liz was kind enough to meet us at the airport and, after the best breakfast in Brisbane, we all went to the new botanic gardens on the slopes of Mt Coot-tha, somewhere I used to run often when I was a student (it was just natural bush then). Now it has a variety of habitats, including a bunya forest, a cactus garden where many huge spiders flourish, and ponds with blue and pink waterlilies. The gardens in bright sunshine were surely the best way to re-set my internal clock!

The original, and still flourishing, botanic gardens were in the Domain down town (in one of the many pockets of the winding Brisbane river). One of my favourite things there is a stand of mangroves on the riverbank. Mangroves are one of the most productive ecosystems on earth — they provide food and shelter for creatures who themselves are feed for fish higher up the food chain, they mitigate the worst effects of storms and tidal surges, and they occupy areas where nothing much else would grow — and I am always happy to see them flourishing. By habit, I lick the back of a leaf — mangroves survive in salt water by secreting salt through pores on the leaves — and stick my nose into a flower if there are any.

We also made it to the “third botanic garden”, the Roma Street Parkland, where many lizards entertained people strolling in the gardens, and flame tree and jacaranda added a touch of colour.

Brisbane has huge numbers of new buildings, but many old buildings (especially pubs) survive in the city. It is also full of surprises, such as the printer’s devils carved on the front of the former Government printing house.

I count all the things that need to be counted.
View all posts by Peter Cameron →
This entry was posted in geography and tagged jacaranda, lizards, mangroves, printer's devils. Bookmark the permalink.