The extraordinary Gothic Town Hall in Leuven has 236 statues in niches on the outside. The building was constructed in the fifteenth century, but the niches were not filled then; the statues were not installed for four centuries, until in 1850 local and national worthies were carved to fill them (including Gerardus Mercator).

But the supports of the statues are mediaeval, and come in matched pairs representing sin and punishment. The first two depict the fall of Lucifer, and the expulsion of Adam and Eve from the Garden of Eden for eating the forbidden fruit.

So right there you have Paradise Lost, the 3-D graphic novel version, abridged to just four panels.

For technical reasons I cannot show you the 3-D version, but here it is in 2-D: 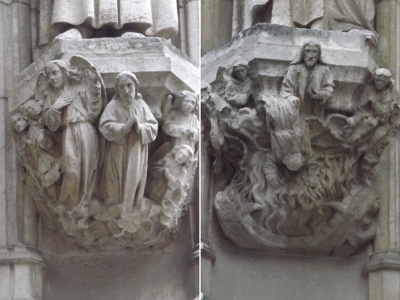 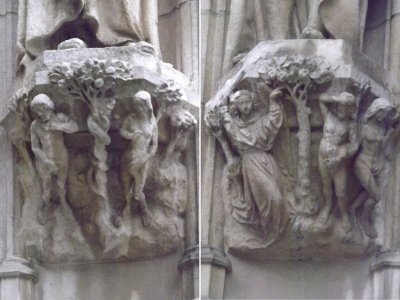 Can you make out the snake’s beard in Panel 3?

I count all the things that need to be counted.
View all posts by Peter Cameron →
This entry was posted in Uncategorized and tagged Adam and Eve, Garden of Eden, Gothic, Leuven, Lucifer, sin and punishment, Town Hall. Bookmark the permalink.