On Tuesday morning, Michael Pinsker started proceedings with the last part of his tutorial. He finished up what he had to say about cases where the age of the infinite template has the Ramsey property (you can use this to put a given function into a canonical form, he sketched a proof of a special case of the theorem), he turned to another technique, infinite cores.

A finite relational structure is a core if it has no homomorphism onto a proper substructure of itself; equivalently, all its endomorphisms are automorphisms. This will not do for the infinite case: we certainly want the complete graph to be a core, but it has endomorphisms which are injective but not surjective. So instead, we require that the automorphism group is dense in the endomorphism monoid; that is, for any endomorphism f and any finite set A, there is an automorphism which agrees with f on A.

Michael explained the relevance of this property, and ended with the infinite version of the dichotomy conjecture, in which cores play a role. See his excellent slides, or the video of his talk, for details.

After my second talk, the workshop proper can be said to have started, with the contributed talks of half an hour or an hour. A mixed bag of things, which I won’t attempt to describe.

This morning, it was snowing and the clouds were looming. I gave my final talk, explaining the counterexamples to the weak synchronization conjecture and why we call a certain graph the butterfly rather than the bowtie. Then back to one-off talks.

This afternoon was the free afternoon. Since it gets dark early, there was no time to go somewhere elsee, so a hike was decided on. The original intention was to walk up Sulphur Mountain, but the snow continued and the clouds loomed: 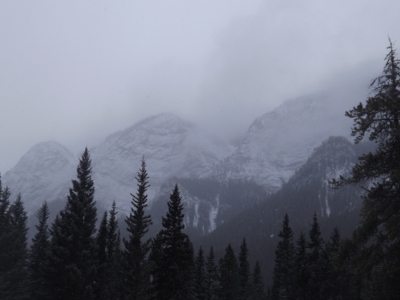 So instead we walked the trail along the valley of the Spray River (or, in Canada’s other official language, Rivière Spray) to a bridge and back on the other side, getting home just before it started to get dark. 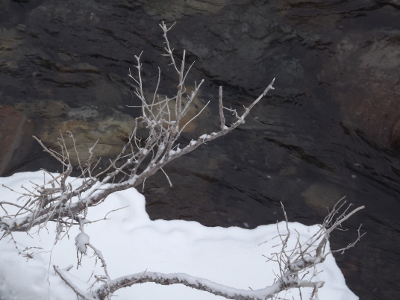 I count all the things that need to be counted.
View all posts by Peter Cameron →
This entry was posted in events, exposition, geography and tagged cores, CSP, Spray River. Bookmark the permalink.