I wrote about the walks already, but not about the conference itself. It was an amazingly friendly and good-natured event: everyone seemed to be happy and cheerful, the College catering staff excelled themselves (they even put on a cream tea on Tuesday), and there was a rich feast of interesting and beautiful mathematics as well.

The trouble is that I can’t talk about everything that happened. I will just ramble on about a couple of things.

Dugald Macpherson talked about maximal closed subgroups of the symmetric group of countable degree. “Closed” here means closed in the topology of pointwise convergence: a permutation g lies in the closure of a group G if the action of g on any n-tuple of points can be duplicated by some element of G, for any positive integer n. In practice it is easier to think of like this: a group is closed if it is the automorphism group of something (meaning some first-order structure; but it can be taken to be a relational structure, like a graph or order, and even to be a homogeneous relational structure like the random graph.)

A reduct (in the permutation group sense) of a closed permutation group G is a closed group containing G. There is also a model-theoretic sense of reduct. Fortunately, in the class of oligomorphic groups (those with only finitely many orbits on n-tuples for all n, the two notions coincide. Thus, a closed group which has no reducts except itself and the symmetric group is a maximal closed subgroup of the symmetric group, and conversely.

I did pay tribute, some time ago, to my co-conspirator in devising the term “oligomorphic”, Roger Green, here.

Finding reducts of specific structures has become fairly big business lately. I wrote here not long ago about Michael Pinsker’s talk in Novi Sad on the 42 reducts (or was it 41?) of the ordered random graph. In fact, it seems, I was the founder of this business, having proved in 1976 that the group of order-preserving permutations of the rational numbers has only five reducts. Of course, at the time, I had no idea what a reduct was (I was just learning logic by teaching it to Oxford undergraduates), and thought I was proving a completely different theorem (a description of permutation groups on sets of arbitrary infinite cardinality which are transitive on the set of n-element subsets of the domain for every n. Moreover, the methods I used (basically finite group theory and counting) are completely different from current technology (using Ramsey’s theorem).

Anyway, Dugald mentioned that there is just one known example of a maximal closed subgroup of the symmetric group which is not oligomorphic. In the next talk, Bridget Webb told us about the countable homogeneous universal locally finite Steiner triple system. The automorphism group of this structure is 2-transitive but has infinitely many orbits on triples. This might be another good candidate for another such group. Would anyone like to try to prove that?

I can’t not mention Peter Neumann’s talk about Kirkman and his “complete theory of groups”. The Reverend Thomas Penyngton Kirkman (the middle name is spelt in various ways) was the third entrant for the Paris Grand Prix of 1860, along with Camille Jordan and Émile Mathieu; the prize was not awarded, and Kirkman is usually regarded as the also-ran. But Peter persuaded us that there was more to it than that. Kirkman’s forte was combinatorics, especially design theory, and his insights might have made a difference to the development of finite group theory had they been taken more seriously. A complex, if ultimately not a contented, character.

There were several things I had heard before, though I hope they were new to many in the audience. These included Alan Sokal’s amazing conjectures about the zeros of the partial theta-function, and progress on some of this by Thomas Prellberg; Rosemary Bailey’s results on design optimality via the Levi graph, or incidence graph, and Robert Johnson on his and Mark Walters’ progress on this. (The name of F. W. Levi, who among other things was the teacher of R. C. Bose in Calcutta, has actually come up a few times in the Durham symposium in the week just past.) Anyway, it is always more pleasant to hear a lecture on something you know a bit about! 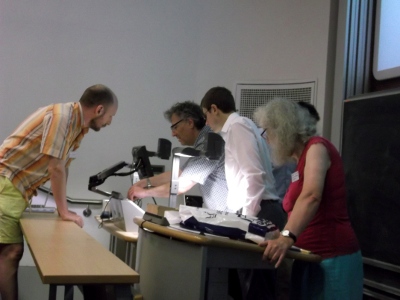 And then there was the amazing multi-media talk by João Araújo, which included (among other things) an explanation of the difference between ordered and unordered pears and why this matters, and messages from, it seemed, everyone in Portugal, from the King to the caretaker at the Cristo Rei memorial on the south bank of the Tejo (the last is on YouTube, if you speak Portuguese). The finish was like an explosion, with bricks in slow motion flying out into the audience (it seemed).

By the way, did you know that the republic of Portugal has a king? Unlike other republics, which mostly either exiled or executed their monarchs when they deposed them, Portugal has kept a king; he is fourth in precedence in the country (so that if the President, Prime Minister, and Speaker all fell under a bus he would be in the hot seat), and, I am told, is more trusted by the people than the three above him! [Actually, João tells me that this was correct up to 2006, when a law was passed removing the royal family from their constitutional position – this was around the time that the Portuguese economy went down the plughole …]

So what can I say, apart from a heartfelt thank-you to everyone who helped organise the meeting, who spoke, who listened, who came on the walks, … Absolutely unforgettable! Peter Neumann’s comment was that he is about to retire again (he celebrated his first retirement with some very hard work on the Galois manuscripts), and he will just have to carry on retiring until he gets it right; I feel somewhat the same, with a busy year in prospect. So, thank you everyone! And you don’t get rid of me that easily!

I count all the things that need to be counted.
View all posts by Peter Cameron →
This entry was posted in events and tagged reducts, retirement, the wall, Thomas Kirkman. Bookmark the permalink.