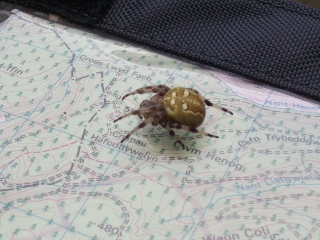 Back from Wales, where the weather was much better than one might have expected.

I gather from the papers that I am supposed to be ashamed of having been an Olympic sceptic, but I am not (though I would say, well run Mo Farah!). But I did manage to avoid the Olympics almost completely, and at the same time to miss the Alternative Olympics which will take place in Llanwrtyd next week, featuring such delights as bog snorkelling, throwing the haybale, and wife-carrying.

It took a little while to get used to the fact that most footpaths and bridleways in this part of Powys are either entirely non-existent, completely overgrown, or somewhere quite different from what was shown on the map. There were other niggles too, such as a bridleway blocked by a huge tractor, leading to a ford where the water was higher than my boot-tops, while an adjacent lane with a bridge over the river had big unfriendly “Private: Keep Out” notices at each end. Part of the problem is the forestry: foresters have no interest in maintaining rights of way, and the council has simply abdicated its responsibility. But the foresters have their logging roads, which are always in perfect condition, though usually not much of a view because of the trees. On the last day we found two good bridleways, from Abergwesyn to Beulah and Beulah to Llanwrtyd, and had a most enjoyable walk with stunning views.

The holiday also included two shorter interludes: a day and a half in the Shropshire Hills, walking on Caer Caradoc, the Long Mynd, and Wenlock Edge (the last of these, though the most famous, certainly the least enjoyable to walk), and a day on the National Trust property at Dinefwr near Llandeilo, seeing over Newton House and looking at the striking views of the Tywi valley from the ruined castle. Also, for the first time ever, I am ashamed to say, I rode the entire length of the Heart of Wales railway line, a pretty (if unspectacular) line from Shrewsbury to Swansea through the Welsh hills.

Meanwhile, I was not connected to the outside world except by the occasional newspaper. I came back to find 232 spam on the blog. Usually I go through the spam in case the spam filter has been over-zealous; but with this many, and a huge amount of other work waiting, this didn’t get done; they all went out (though deleting so many did give WordPress some problems). So apologies if you posted a comment which hasn’t appeared; you may want to try again now I am reconnected.

I count all the things that need to be counted.
View all posts by Peter Cameron →
This entry was posted in maps, Uncategorized and tagged spam. Bookmark the permalink.