Gilbert’s meditative sentry noted with amused interest that each of his fellow-citizens of either sex was born with what traditional scholastics might have called a ratio seminalis, or inborn tendency, to Liberalism or Conservatism. There is still more truth in Coleridge’s dictum that each of us is from birth a Platonist or an Aristotelian.

The distinction between Plato and Aristotle, in various formats and variations (idealism/realism, etc.), runs through a large part of Western intellectual culture. Mathematics is clearly not immune to this distinction; in fact, in mathematics, we are at the sharp end, since the basic question in the philosopy of mathematics is: Is mathematics discovered or invented?

On the one hand, mathematics consists of squiggles on pieces of paper in books and journals, on blackboards and computer screens, and perhaps in electrical activity in the brains of mathematicians. However, I am a bit reluctant to admit this, since when I prove a theorem I may well be wrong; I feel more confident when I have written the proof out carefully, and more confident still when I have sent a paper to a journal and a referee has checked it carefully. (If only this always happened – but that is another matter!) Yuri Manin said, “A proof only becomes a proof after the social act of ‘accepting it as a proof.”

On the other hand, mathematics has an eerie stability and permanence which is foreign to any other science or art. Galileo and Newton demolished Aristotelian mechanics, and Einstein showed that even Newton’s mechanics is only an approximation, which breaks down at large distances and high energies. Painting and literary styles are even more temporary. However, proofs which have been around for a couple of millennia, such as Pythagoras’ proof that the square root of 2 is irrational, and Euclid’s proof that there are infinitely many primes, are not only completely accepted today, but are held up to students as classic examples of important proof techniques. How could this happen if it were not that mathematical truth has some Platonic existence independent of the fashions of mathematicians?

The Platonic view smacks of mysticism, which is supposed to be anathema to hard-nosed scientists. Yet, informally, most mathematicians seem to take a Platonic view of their work; few would admit that the argument for their latest theorem is simply an invention like one by Bach.

I cannot resolve the difficulty in this short account. But recently I have read two books which both hit on the same analogy to explain an intermediate position. Basically the claim is that “Mathematics is like mountain-climbing”. Here are two statements of the position.

There is a strong parallel between mountain climbing and mathematics research. When first attempts on a summit are made, the struggle is to find any route. Once on the top, other possible routes up may be discerned and sometimes a safer or shorter route can be chosen for the descent or for subsequent ascents. In mathematics the challenge is finding a proof in the first place. Once found, almost any competent mathematician can usually find an alternative often much better and shorter proof. At least in mountaineering we know that the mountain is there and that, if we can find a way up and reach the summit, we shall triumph. In mathematics we do not always know that there is a result, or if the proposition is only a figment of the imagination, let alone whether a proof can be found.

Kathleen Ollerenshaw,
To talk of many things: An autobiography,
Manchester University Press, 2004.

Suppose that you are a rock climber. Climbing involves you, a human, and the rock on which you are climbing, which is mineral and completely nonhuman. The ledge on which you hoist yourself was not waiting for you: it is a result of erosion acting on compacted sediments originally deposited on a sea bottom many millions of years ago. Yet this ledge, on which you now precariously stand, and the handhold, fortunately excellent, that you just found have a lot of meaning for your human nature: your life depends on them.

In the rock climbing analogy, the question is whether there are several routes to the top of a cliff, and the answer is often yes. In mathematics, too, the conceptual structure of a subject can often be developed in different ways. So the reader familiar with measure theory will know that abstract measure theory is favoured by some colleagues, while others prefer to deal with Radom measures. And the probabilists (who are a bit isolated in the community of mathematicians) study measurew sith their own terminology . . . and their own concepts and intuition.

To paraphrase Ruelle, as I did in a review of the book in Times Higher Education, there is no Platonic route up the cliff, but there is a limited choice of routes which almost all climbers will find. However, a lizard, or an alien, will see a completely different landscape. In the same way, a lizard or an alien may construct a completely different mathematics from ours, but what we construct will be stable and long-lasting.

Why this should be so is another story. My own view, somewhat Chomskian, is that there is a “deep structure” in our brains which determines the mathematics we do, playing the role of the structure of the mountain we are climbing. But I don’t want to push this too far.

How pleasant then that, for a conference for my sixtieth birthday, my colleagues chose to portray me as a mountaineer! (The Coxeter–Dynkin diagrams on the rock are relevant to the story; but I may get round to talking about them another time.) 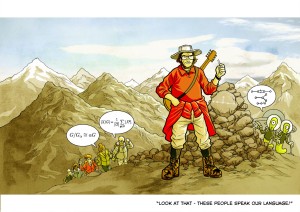 I count all the things that need to be counted.
View all posts by Peter Cameron →
This entry was posted in doing mathematics, geography, mathematics and ..., Neill Cameron artwork. Bookmark the permalink.

3 Responses to Mathematics and mountain-climbing